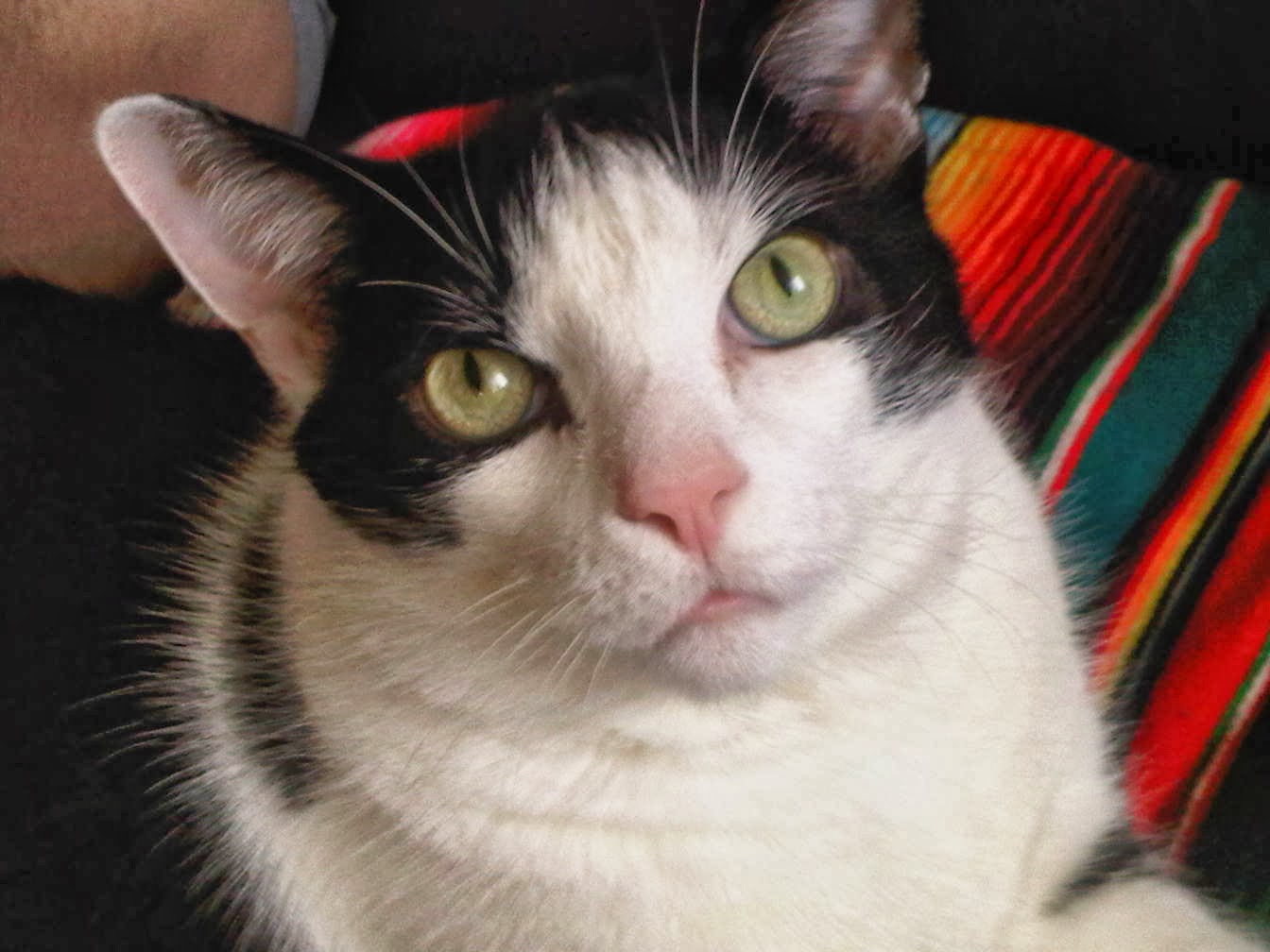 We have an awesome cat.

Correction; we have an awesome recycled kittypuss.

His name is Hexamorph (obv. not our choice of names), and he is a short-hair domestic pussycat of awesomeosity.  That's his scientific name...I looked it up.


Oh, and he has thumbs.  Actual, jointed, working thumbs with claws. He's what's called a polydactyl cat. In addition, he also has what I call a bonus "raptor claw" in the webbing between his thumb and first digit, which, let me tell you, can get very sharp and pokey (he's not a big fan of me, or anyone, trying to clip that particular claw, so it's a real fight).
He also has extra claws on his hind feet, but they're not jointed.  Still weird lookin', though.

Our former roommate's cat, she left SexyHexy behind when she moved in with her then-boyfriend, as he already had two cats in a small, 1-bedroom apartment, and it would have been too traumatic for all of them to try and live together (humans included). In addition, Hex had developed a serious man-crush on my husband, and she felt it would be cruel to remove him from the first long-term stable home he'd had during his short life with his apparent love for -- and possessiveness of -- the dominant male in this household. 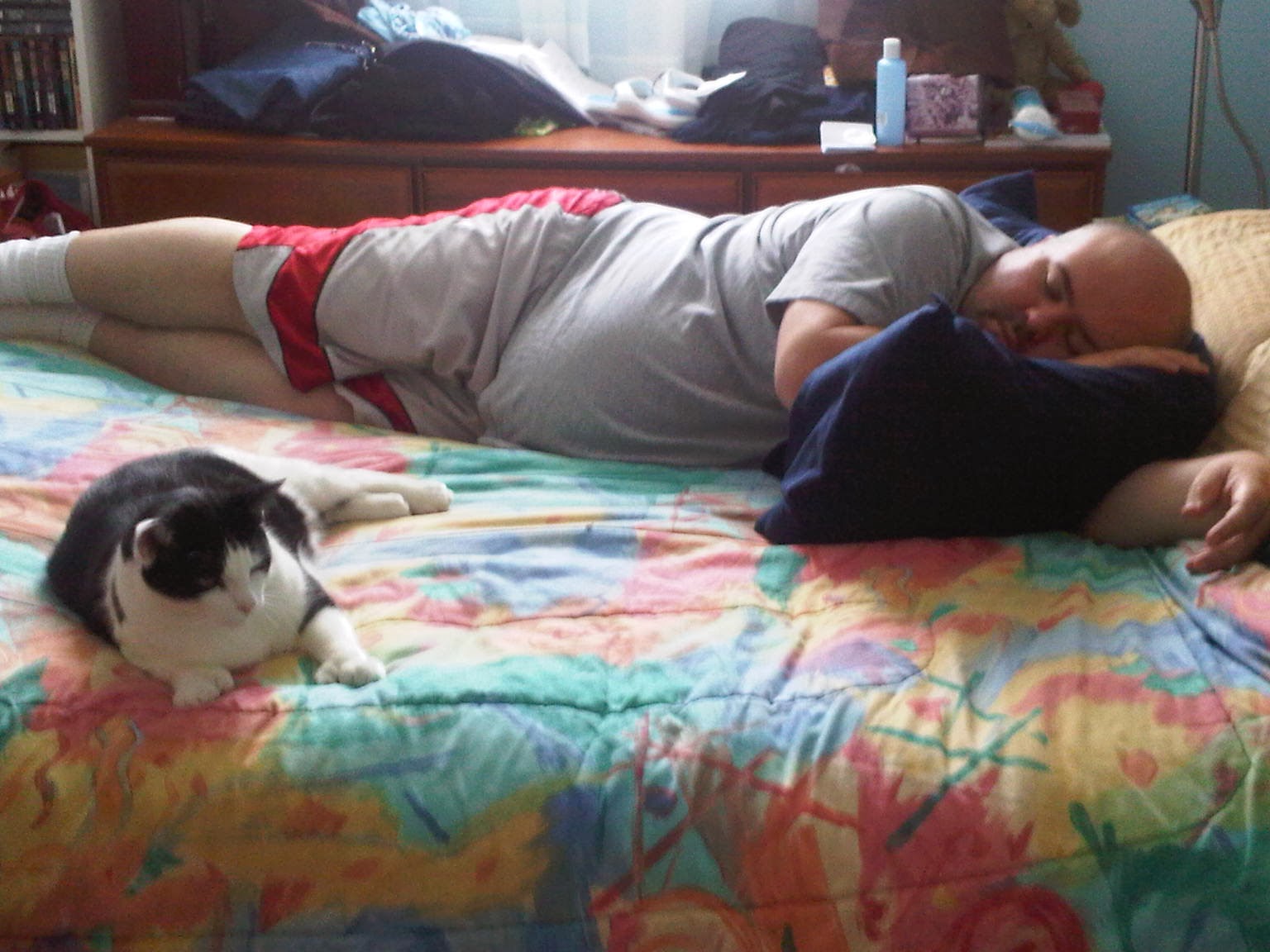 My hub was initially resistant to the idea of having another cat; he's more of a dog person, and when our own cat had to be put to sleep the year prior due to age and stress/health related issues, he claimed he didn't want any more animals, period.  But, somehow, Hex worked his cat magic, and now they're best buds.  It's a real treat to see this mutual admiration society interact; Hex has Hubby well-trained for his 5:30AM wake-up call, for his first "nommins" of gooshyfood and some play-together time until my guy has to get ready and head out for work. Then Hex will sleep away the day, and only arise with excitement once Hubster walks through the door. I could cover myself in tunafish or Turkey-Hams (his two favourite treats), and I'd get nary a look once the AlphaMale walks into the house from a long day of work. Trying to pry these two apart is a lesson in futility.

It used to be the former roomie's and my great pleasure (to my husband's great annoyance) to dress Hexy up in costumes depending upon the season. So far, Hex has been: 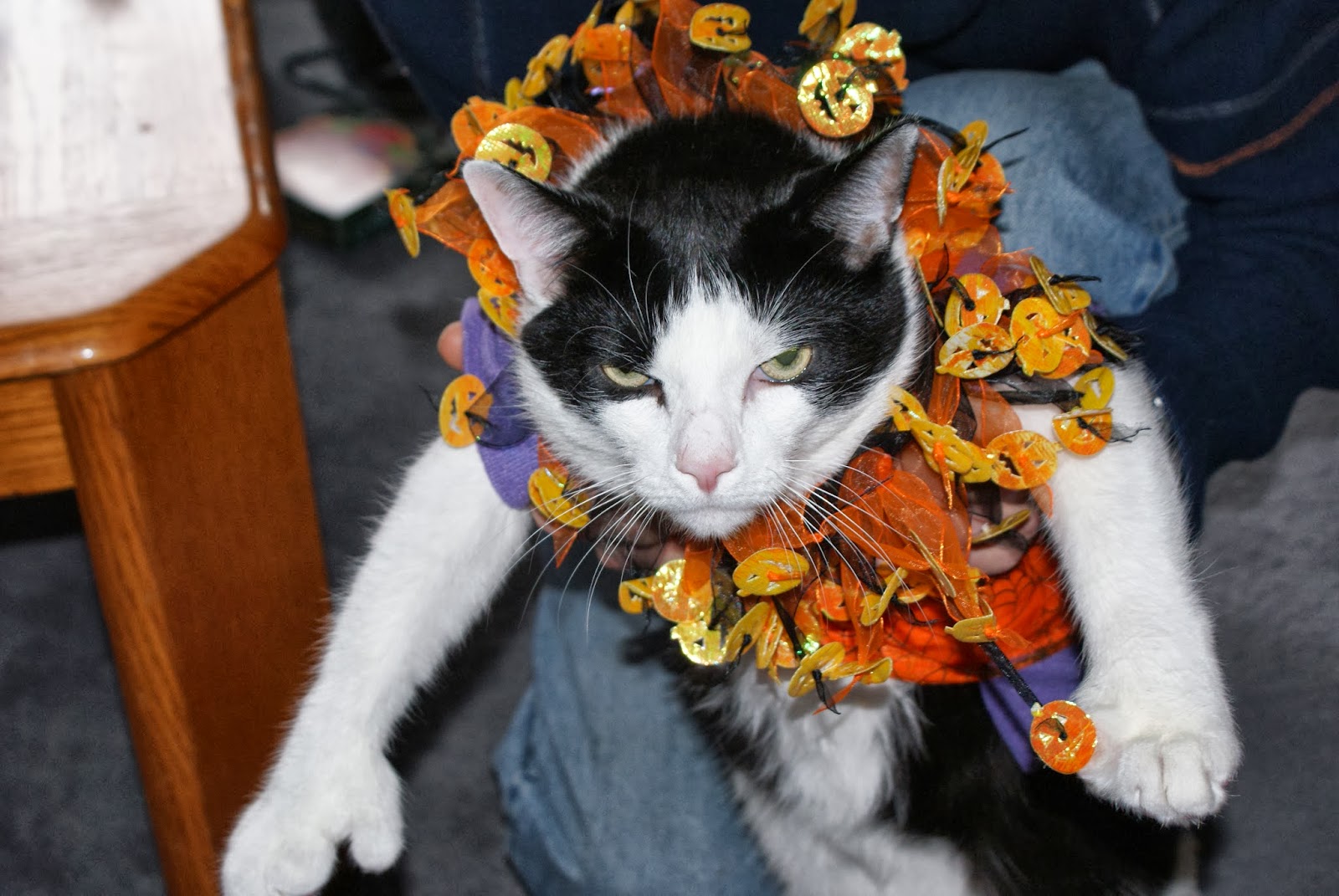 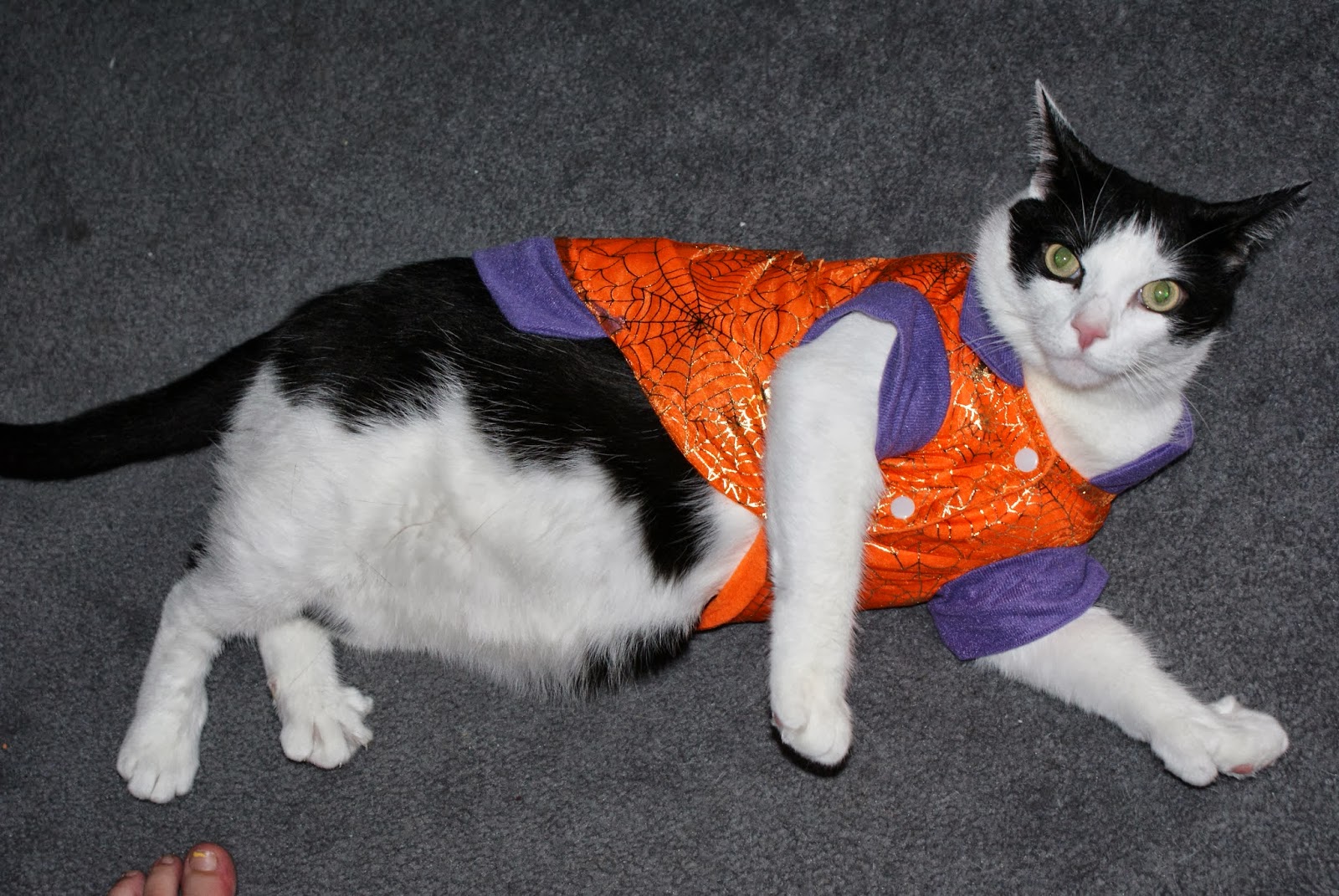 
A dainty dame for Mother's Day,

And a "happy" little Santa's elf.

He's also dressed himself up in the extra tulle netting that a friend was sewing into a Halloween costume and had carelessly let pool on the floor.  Invitation accepted!


I'm trying to finagle my way into dressing him up for Halloween this year, despite a moratorium instituted by He Who Bellows that Hex is no longer allowed to be dressed up like a prostitute for the amusement of me and my friends (hey, thought for a new show, called "Pimp My Cat"! Me likey!).  We'll see, we'll see....mwaa haa haa!

In any case, I'm very glad that Hex is now part of our lives. He has his own fanbase within our families and groups of friends; some even come to visit us out of sheer curiosity about Hex!  Whatever works.  He's our baby now, and we love him dearly.

...now if he'd only stop horking up hairballs on our bed.  That's be awesome, dude. Thanks. 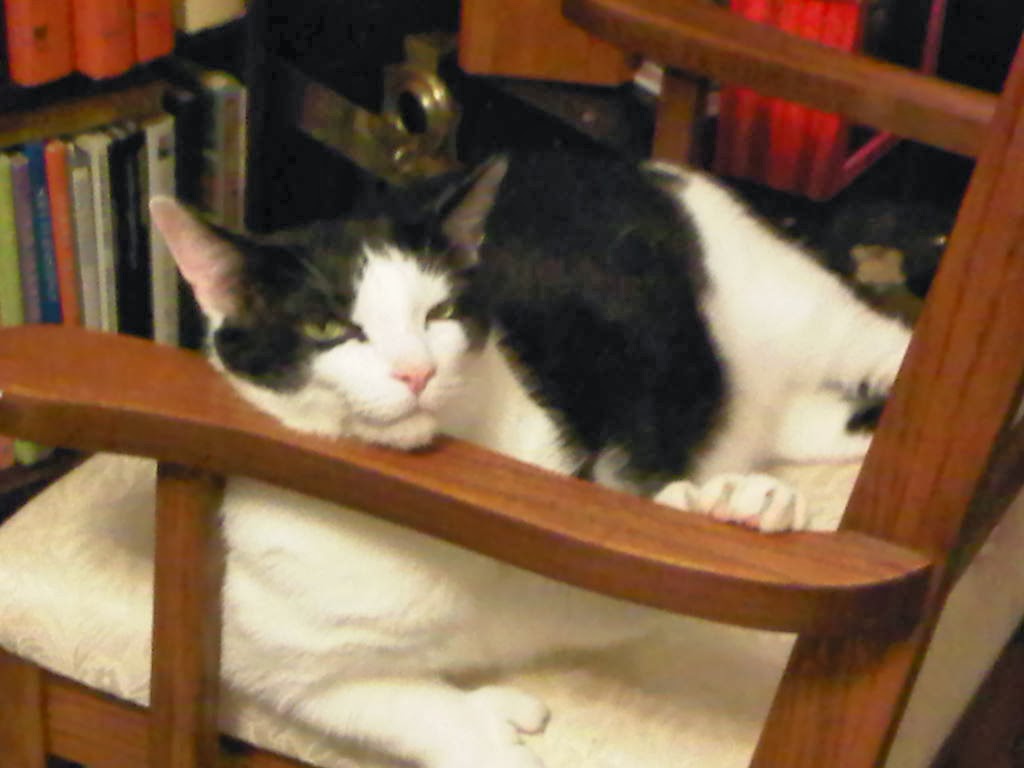 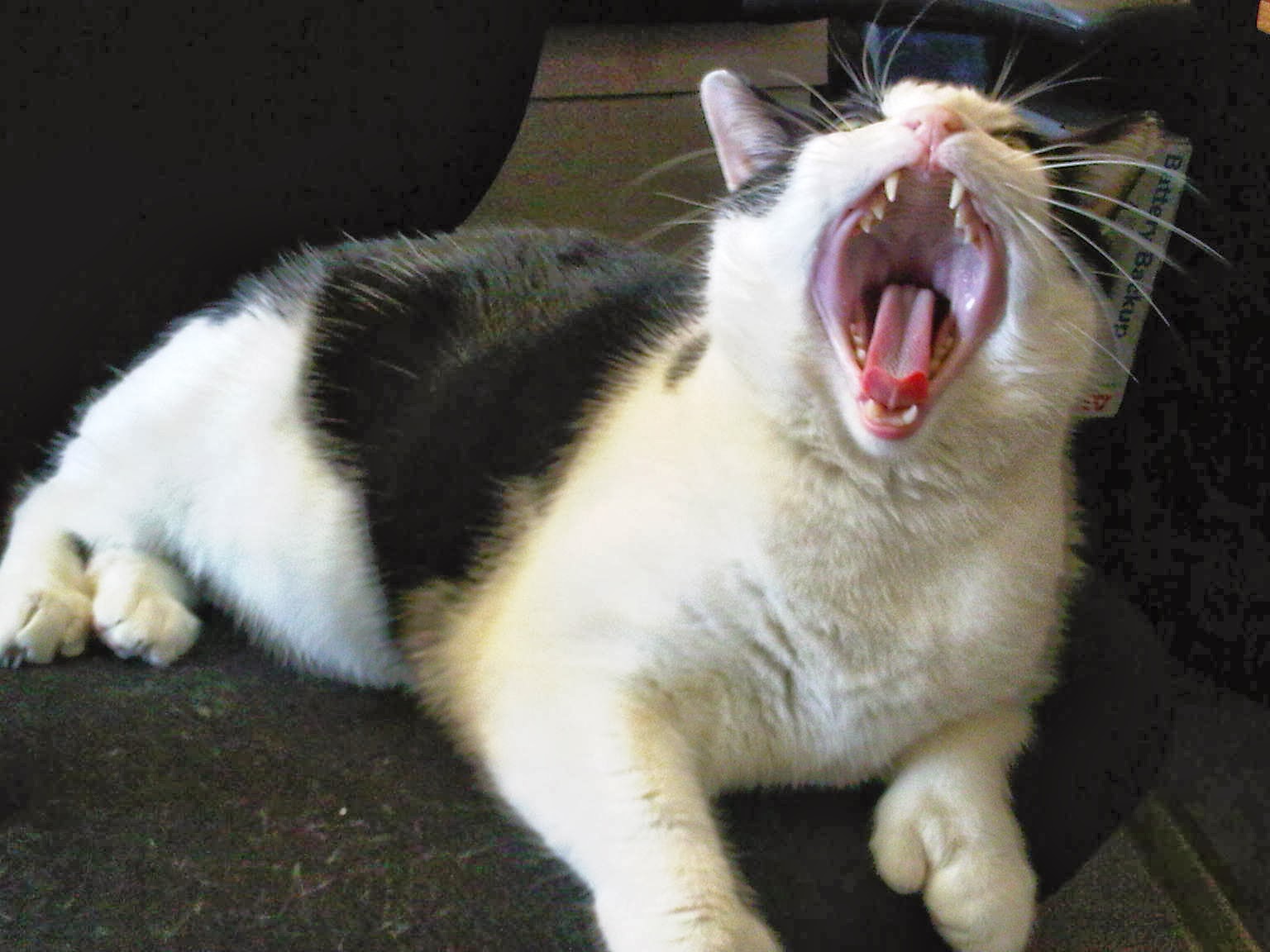 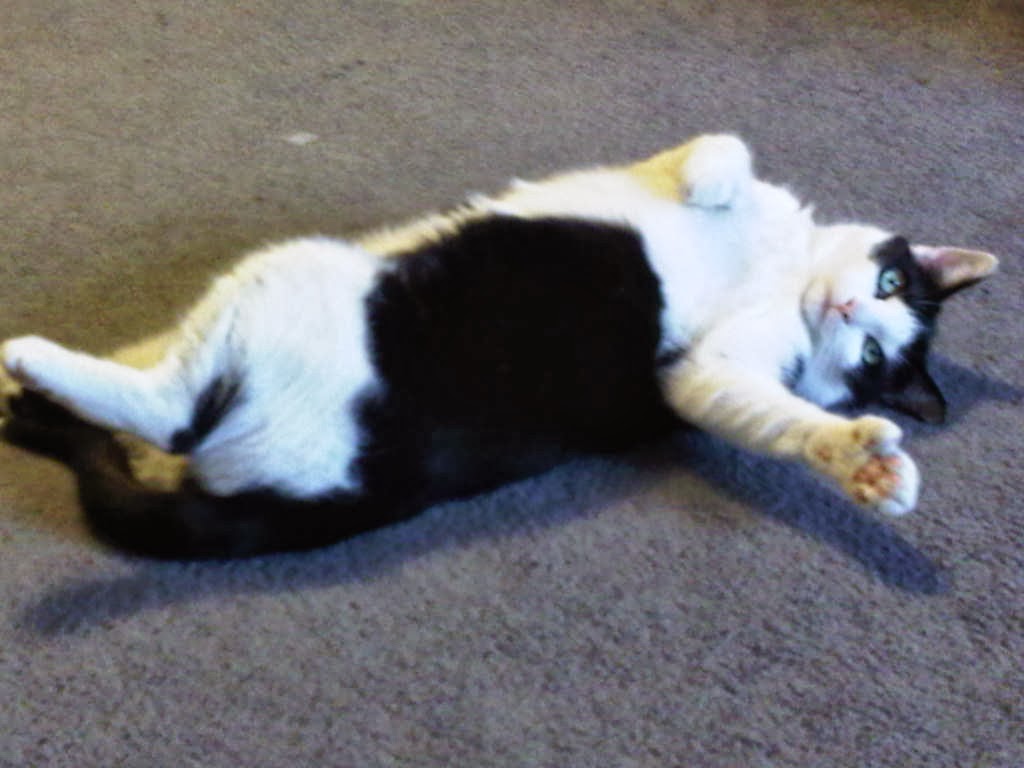