Commission Tales: So many little'uns, so many birthday cakes...

Right after I had completed the birthday cake commission mentioned in the previous post, I had to start work on the next one due only a few days later.

Also a vanilla funfetti flavour (totally a coincidence, whodathunk...) for the bottom tier, and deep chocolate for the top tier, this cake was a gift to an amazing couple I've known for a while now.   The dad, A, and I met back in 2009 while working part-time at my college's bookstore while I was going through pastry school, and I met his lady love, K, in 2011 when they started dating. Now they have an adorable little boy with a *kick-ass* name, and I wanted to give them a special gift of the cake for his first birthday party.


This cake was to be safari animal themed; a friend and I had made a jungle/safari themed baby block cake back in early 2012 for another client, and I was interested to tackle it a little differently this time around.

This time, the cake was to be two-tier, with zebra stripes on the bottom tier, and a jungle/safari theme (my design discretion) on the top tier. Unfortunately, I had managed to fillet my right index finger quite messily the evening before I was to do a dry-brush edible paint technique along the sides of the top tier, emulating tall grasses, trees, birds and swinging monkeys, so I sadly had to leave that off the final cake. At least I had already made the fondant figures for the top, so they were good to go...with one exception..dun dun DUNNN!

I had made a sweet articulated fondant monkey figure for the top tier that was to hang off the side of the cake, like he was playing in the (to be) painted trees, but as I was boxing the cake up the morning it was due, he suffered a fatal fall and shattered.  Creepily, the few pieces to survive the fall were both of its wee front paws, which I must say looked super-disturbingly realistic, and reminded me uncomfortably of the novel, "The Monkey's Paw".  No monkey-related pictures were taken prior to the accident, and I was just too disappointed after the fall to document the tragedy, so nobody but myself, my friend Miss Kitty, and the Hubster will ever know how cute he was going to be.  *sniff*

Of the other fondant figures, I made an elephant and a python, as well as two golden fishies for a small pond circled by stones.  My technique continues to improve; I'm hard on myself, but I know there's nowhere to go but up!

In any event, here's the final cake in all its (unpainted) glory: 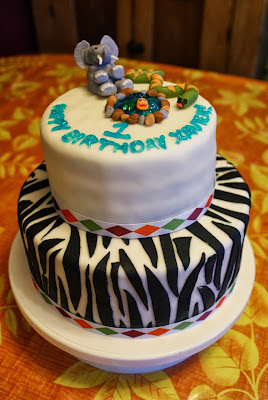 Zebra stripes hand-cut and layered. First time for me, and I think I know how to do it even better next time (thinner pieces, more slight curves, fewer white spaces).
Yes, I know you can see the layers through the fondant in the top, but that would have been covered over by the brush technique mentioned above. Shuzbut.

My next challenge looks like it's going to be a monster-themed cake for Hallowe'en. Miss Kitty and I have some ideas of auctioning off the cake for fundraising purposes for our local Scouts Canada group, of which we are both active volunteers.  Watch this space!